Snow in the Desert

Yesterday the rain was falling and it was cool, cool, cool for the desert. I kept hoping to look out my window and see white flakes sprinkling down. While the snow didn't quite reach my neighborhood, Mother Nature did throw some spooky, dark clouds my way and they dropped graupel and hail while thunder boomed and lightning flashed. It was an epic storm and I felt blessed to witness it. Sure it's cold, but bring it on. BRING IT! I'm dreading the shift of weather to when the average is 110 and the low is 100. No thanks, I'll keep the sweatshirts and beanies out as long as possible.

When I read the news about Flagstaff, Prescott, Payson and the White Mountains receiving record snowfall, I knew what I had to do. After dropping M off at school this morning, CJ and I headed north. I decided I would drive as far as Rock Springs. Lucky for us we only had to get as far as Anthem! Snow was on the hillsides and on the roofs, never before have I seen anything that stuck! We exited at New River and drove to the local park. I expected to see other families out and about exploring, but we were fortunate and had it to ourselves.

CJ promptly stepped in mud, then rushed off to the thickest patch of snow-covered grass to make a snow angel. I brought my long lens to try and capture the snow that had accumulated on the cacti and plants. After about 30 minutes, CJ was cold and crying because his hands were wet, and he had the bright idea to remove his boots and stick his socks in the snow. Not a good idea!

Back in the car with a fresh pair of sock and shoes and the heater blasting, we headed north. I was blown away by the landscape. I've driven this stretch of road so many times, in every season, but never in my years have I seen it covered in snow. New River was flowing, Moores Gulch, flowing. Clouds shielded the view of mountains and mesas, but every now and then they were thin enough to peek through to the glorious white snow sticking to the plants and rocks.

We got to the Black Canyon City exit and grabbed a table at the Rock Springs Cafe. While I sipped hot coffee, CJ devoured a plate of pancakes and I picked up a few mini pies to go. If you're ever on a road trip in the great desert of Arizona, do yourself a favor and stop at Rock Springs Cafe. You won't be disappointed.

As we exited the restaurant the snow was melting and a gentle rain fell around us. We explored the springs a little and after CJ slipped on a rock and got his second paid of shoes wet, I decided it was time to go. He fell asleep as I exited on the west side of New River Road and my goodness, was that a beautiful drive. The snow that was there only an hour before was already gone, but on the mountains in the distance it held on, until the sun broke through and it disappeared before my eyes.

A beautiful day and reminder of why I do, what I do, and how fleetingly beautiful life can be. 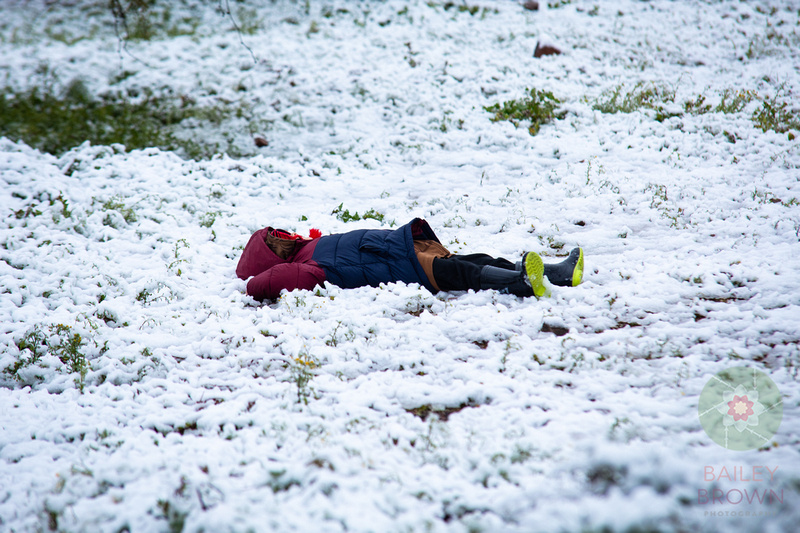 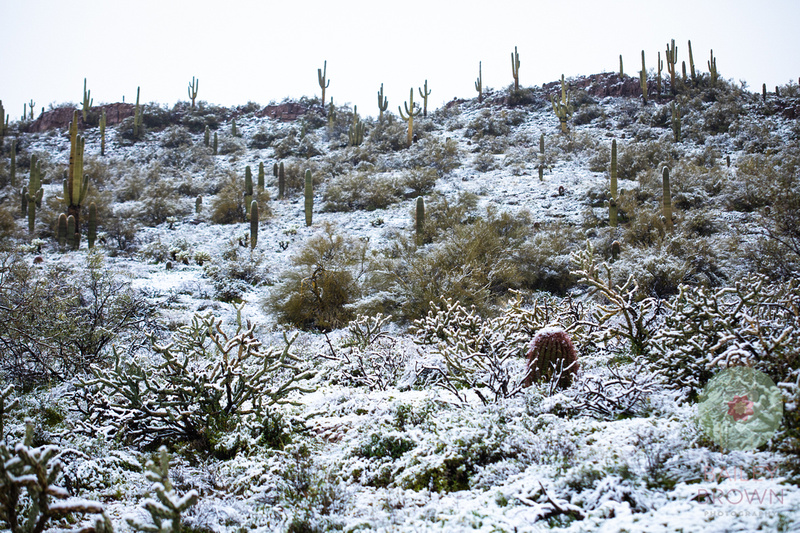 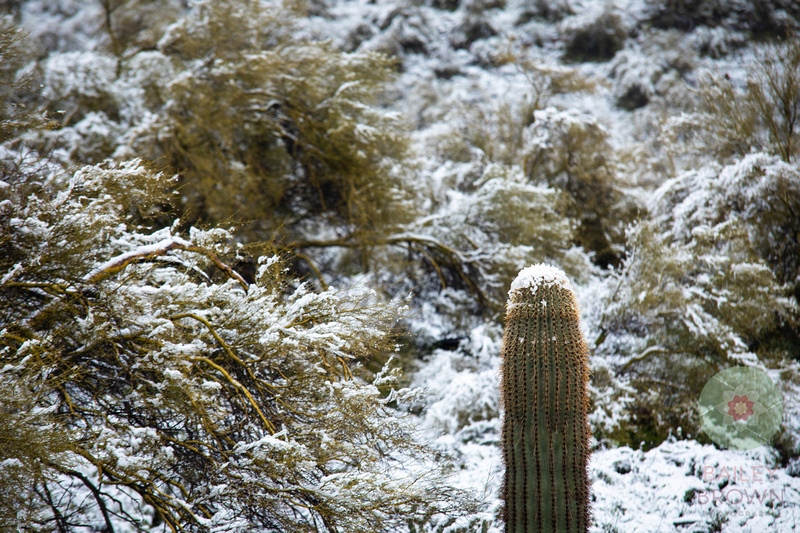 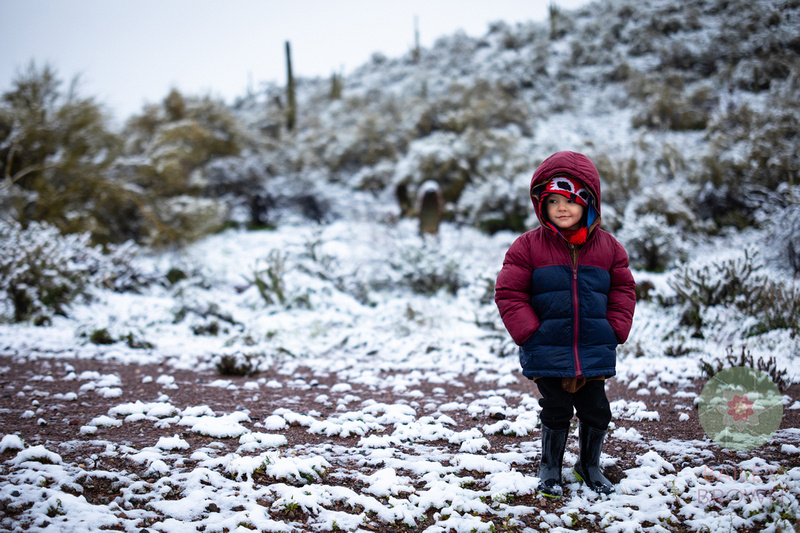 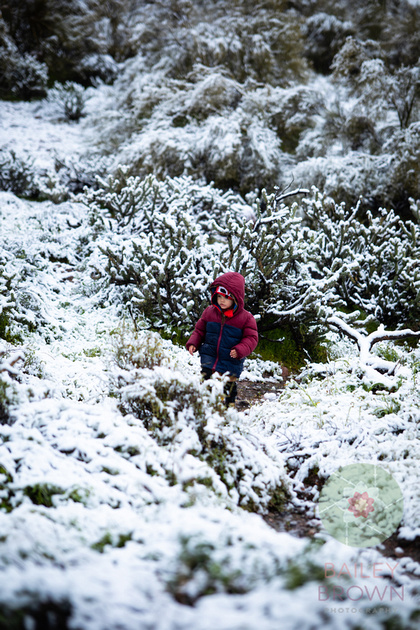 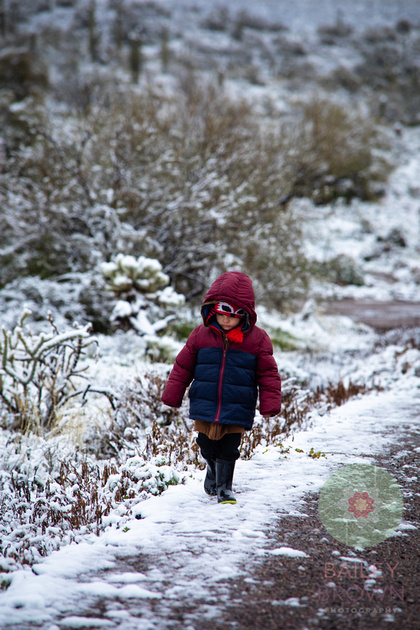 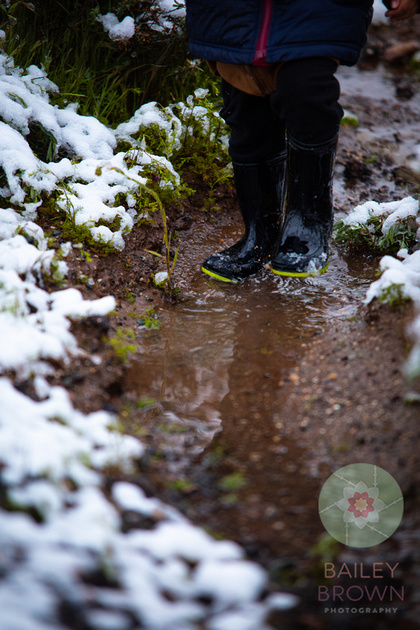 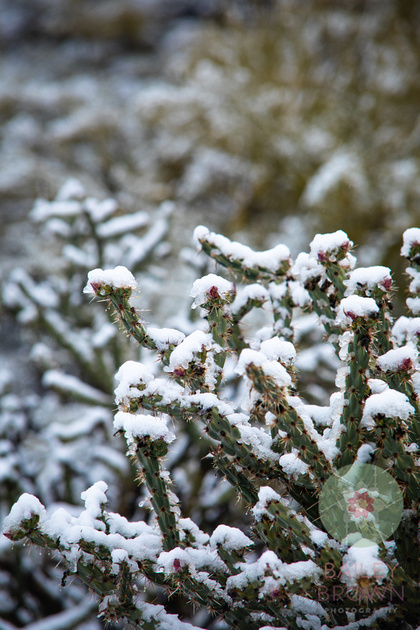 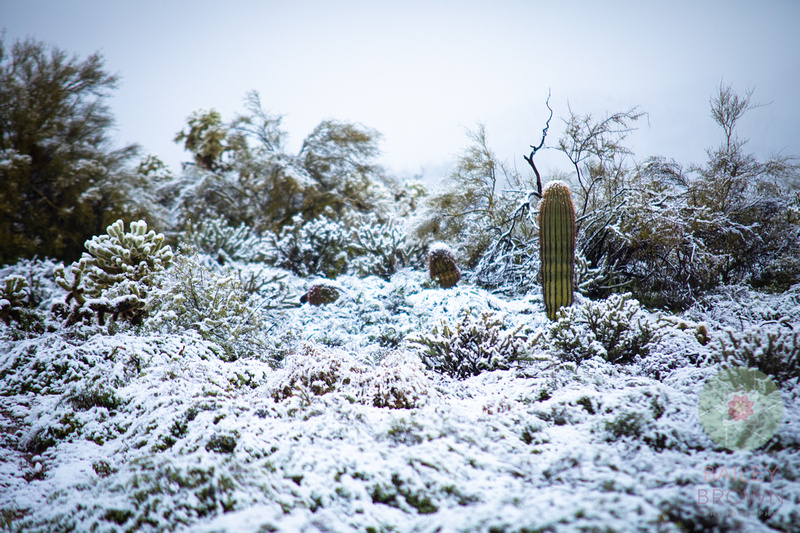 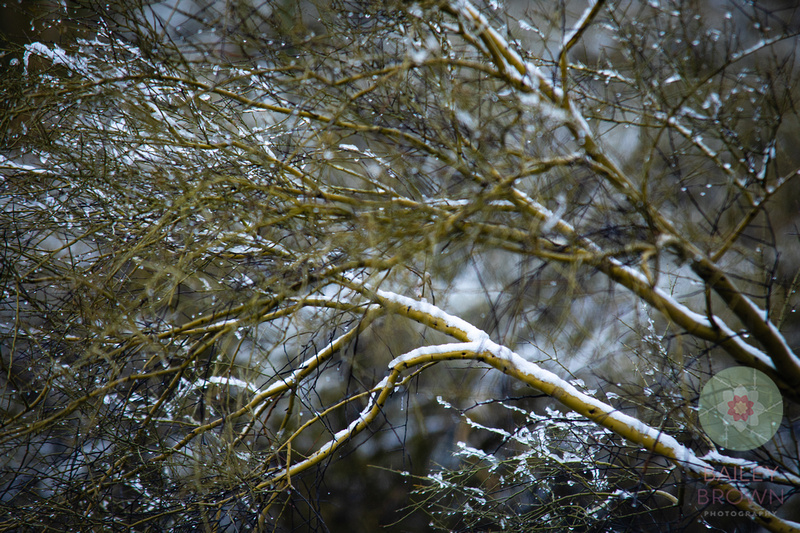 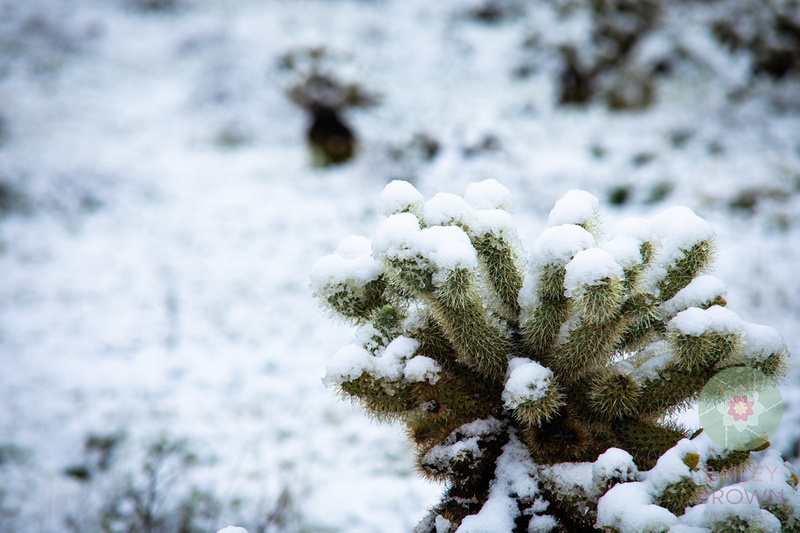 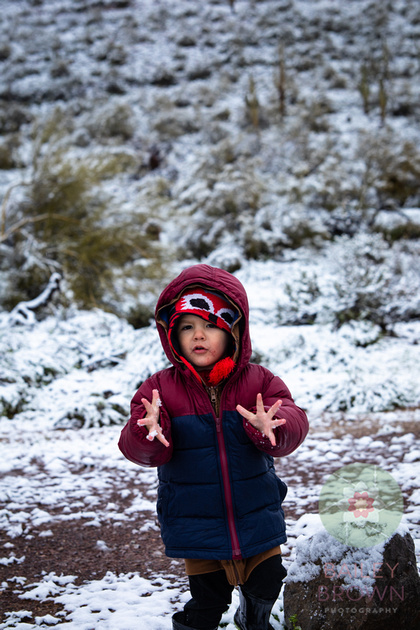 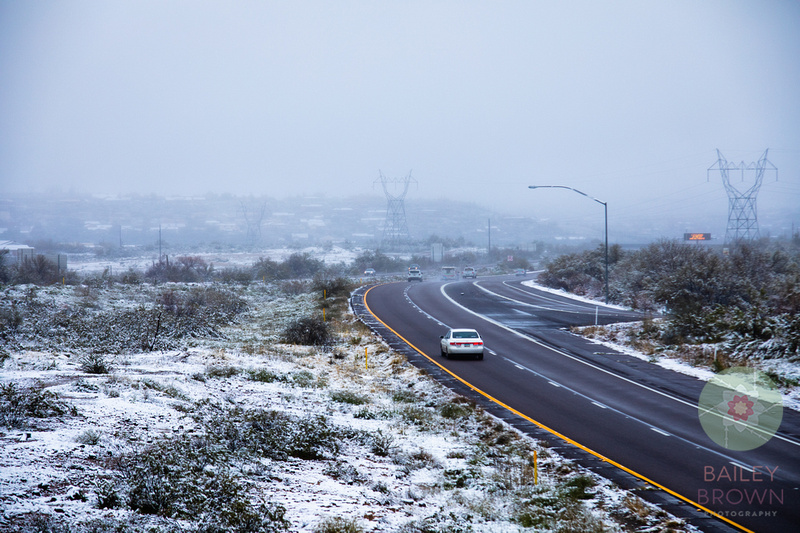 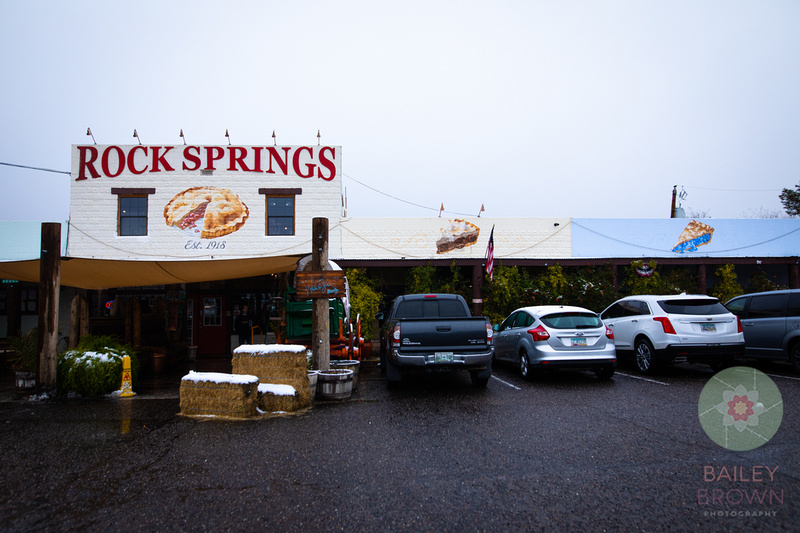 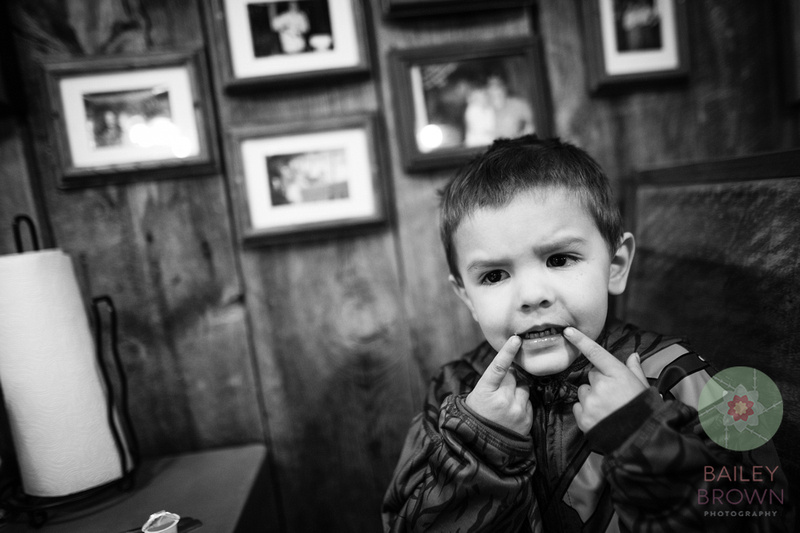